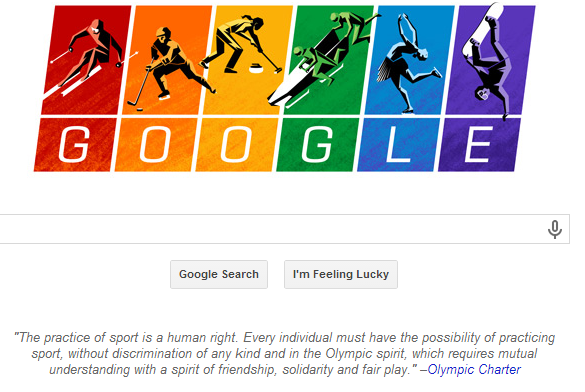 As a hour before the start of winter Olympic opening ceremony, Google is also showing its supports over the game by displaying a Winter Game Doodle on its home page. Winter Olympic Athlete Meet 2014 which is going to took place on Russia.


On the Doodle Google have putted a rainbow theme color as like its logo with highlighting the different games over its each character. Along with the Doodle, Google mention a quote at the bottom of the page highlights a particularly poignant section of the Olympic Charter:


"The practice of sport is a human right. Every individual must have the possibility of practicing sport, without discrimination of any kind and in the Olympic spirit, which requires mutual understanding with a spirit of friendship, solidarity and fair play."

Google also protesting against Russian President Vladimir Putin's scarcely veiled campaign against gays and there has also been much discussion on how Russia would deal with gay athletes during the Winter Games.

As same as earlier also, Google shows its supports and wishing on the Occasion to its users by its Doodle.
#Google