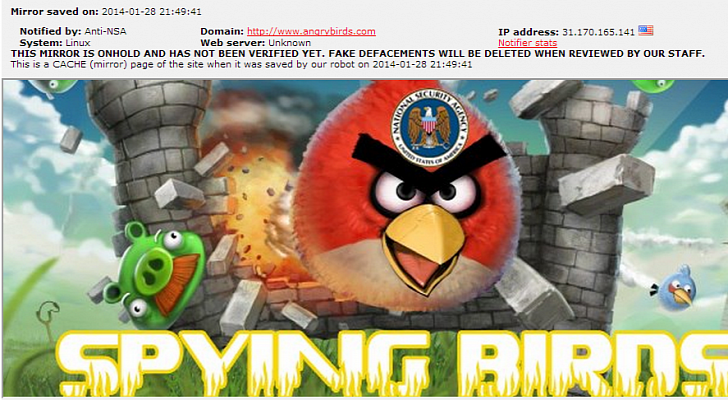 Yesterday, Official site of Angry bird has been hacked by the hackers. A popular hackers group "Syrian Electronic Army" have tweeted that friend of their have hacked and defaced the site of the Angry bird. For this they have made a mirror of the hack on zone-h. As per the Deface mirror, its says that the notifier of hack was "Anti-NSA".

It seems that the hack was just to protest being with collaboration with NSA.

Last day, Angry Bird developer 'Rovio' have been targeted by many of the media companies and published a report NSA and GCHQ are using mobile apps for harvesting the users data including Angry Bird.

On the Twitter, Rovio have replied to Cyber Kendra and stats that they are not supporting NSA and GCHQ. They says that,


The alleged surveillance may be conducted through third party advertising networks used by millions of commercial web sites and mobile applications across all industries .Rovio does not allow any third party network to use or hand over personal end-user data from Rovio’s apps.


Our fans’ trust is the most important thing for us and we take privacy extremely seriously. We do not collaborate, collude, or share data with spy agencies anywhere in the world.

After contacting to the Rovio, there representative  have confirmed that the Angry Bird Site was hacked. However, F-secure researcher, says that angrybird.com has not actually breached, rather the attack was DNS hijacking.
#Defaced #News #NSA