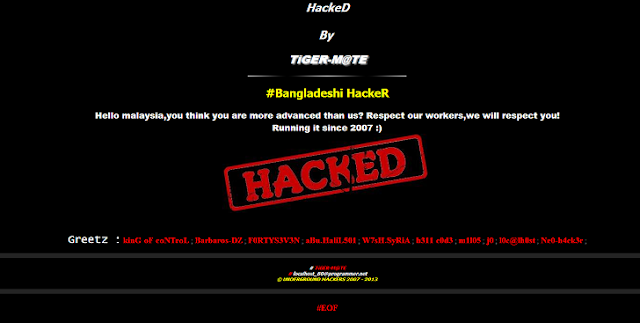 Once again a well know hacker "[email protected]" from Bangladesh have hacked the high profiled sites of Malaysia.
Few months ago same hacker have hacked the some high profiled sites of Malawi, by the technique of DNS poisoning. This time also hacker used the same technique and defaced the high profiled domain.
The domain that was got hacked and defaced are Microsoft, Dell, Skype, Kaspersky, MSN and Bing. As we can see that all the site except Google have got hacked.
On the deface page hackers wrote


“Hello Malaysia, you think you are more advanced than us? Respect our workers, we will respect you! Running it since 2007 :)”

This hack was took place on Today's morning and  the Malaysian online domain registrar MYNIC has admitted that its systems have been breached. As they have wrote a statement posted on their official website.

This time all the affected site have been fixed and as domain registrar have resolve the issue as they have got alert.
Mirror of the hacked here
#News #Security