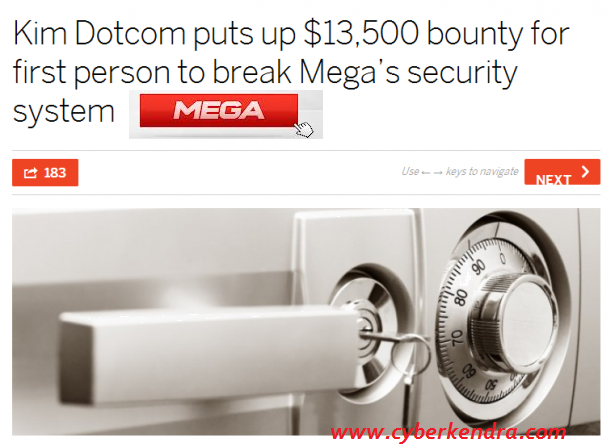 As recently one of the biggest file hosting site have relaunched after the shut down of "Mega Upload" named as "MEGA". They have came back with the great new feature and also with the Cloud storage facility. As it was launched in 19 January of this year, they have brought the  great  news for the researcher and bugs hunter.
Mega have introduced with the new bugs bounty programs on their site. They are inviting the security researcher for finding the bugs on their hosting site.. Mega is going to pay a reward for each bugs reported to them. To improve the design flaws and the security of the site they have started a bugs bounty programs.

Types of the Bugs

They will not accepts the bugs that need
There are more scenario where bugs didn't accept. Read here..

Mega is giving Eur 10,000 for the each bugs. Reward may increase depending upon the impact of the vulnerability.
They are giving the reward to those who first finds the bug. Buys that are reported by the third party are not included in the bounty programs and hence will not reward.
After finding the bugs you can send them under the following mail address [email protected]