Blackberry was going to launch its two new product on market after 2 months, but before that its picture and design have been leaked on Internet. 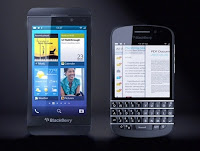 Blackberry two handsets Blackberry 10L and Blackberry 10 N series, picture have been leaked on the Internet.
Canada mobile making company Research In Motion (RIM) are making and designing these to phones for blackberry. These two handset are launching after 2 months in the market. Blackberry was expecting more with this products as the simultaneously getting down of its products. As apple Iphone and Android based phone had dumped the many shares of the blackberry.
As from the leak picture of these handsets Blackberry 10L and Blackberry 10 N series, it is clarify that  both the phones will have full touch screen.
According to the report of UK  telegraph, these device will have full Qwerty board.
These  picture were leaked when RIM suffered the loss of $235 million. But In India its sell percent have been increased. Blackberry is popular because of its push back mail service only between its executive. User can use its email as a SMS with the push mail service.
#News