Apple Iphone 5 have been launched.

Apple CEO Tim Cook on Wednesday in San Francisco, the company launched a new iPhone 5. It is the company's thinnest smartphone ever 4G handset is ready.
The four-inch display is larger than the iPhone 4S. Compared to 20 per cent in the same time it is light.
Apple's competitive smartphone equipped with Google's operating system because of the challenges it is lowered with new features.

● The phone is provided with a chip was designed by Apple. The chip makes this phone the previous models is the doubly potent.

● I Phone -4 -5 Like the iPhone, the camera has eight megapixels.

● I Phone 5 and meet with him through the software will be photographed in low light much better than before.

● Completely made of glass and aluminum being extremely light and slim iPhone -5. 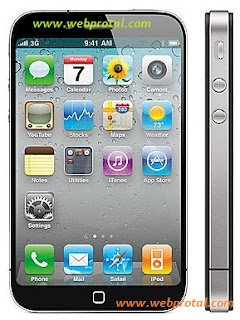 ● Earlier than the iPhone has tried everything compact.

● Apple claims that the new iPhone's internet speed is highest.

● The half-inch display of the new iPhone has been stretched 4 inches.

● The iPhone is already on the screen. The user can easily see the application.
#Gadgets